How HEXWAVE works:
Figure 1 depicts how HEXWAVE works, emitting a low-power signal, 200 times less than Wi-Fi. It then captures the reflections to create an active real-time 3D image, which is interpreted by AI. 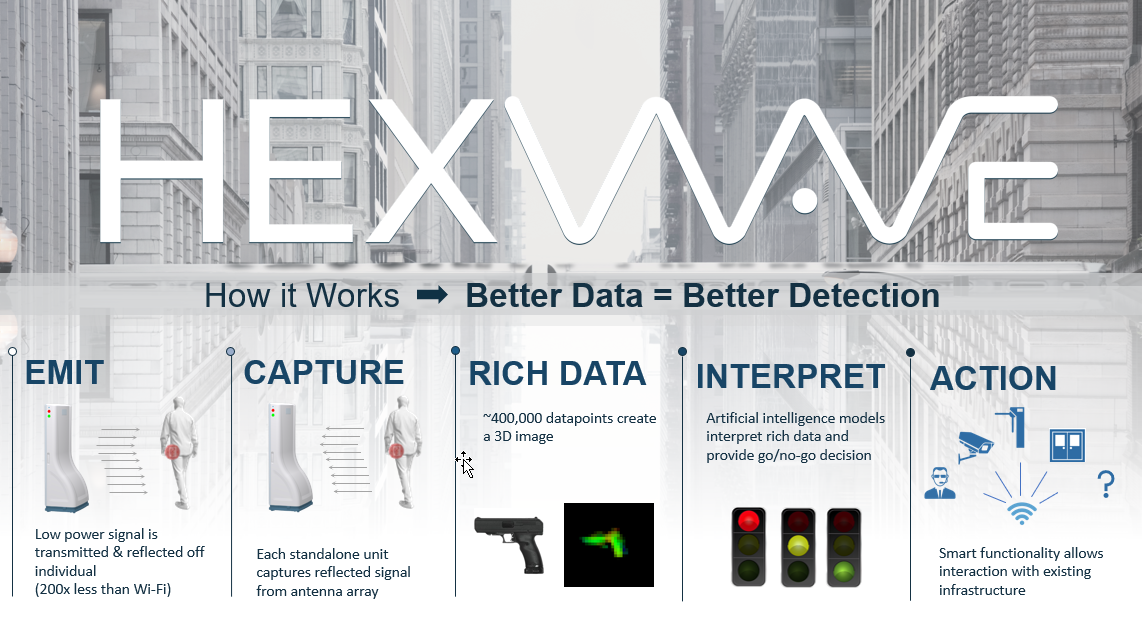 On June 6, 2019, Liberty provided an in-depth understanding of HEXWAVE and its four subsystems:

Following the completion of the HEXWAVE prototype, which was demonstrated at Liberty’s Center of Excellence in Atlanta, GA, on September 26, the company has continued to advance the speed and efficiency of the real-time 3D imaging. The achievement of active real-time 3D imaging, created from 400,000 data points in the Liberty Defense labs using the HEXWAVE prototype, is a significant milestone. Machine learning models are trained using this 3D imaging and data to make its prediction about the weapons or non-threatening objects. The completion of hardware systems (Antenna Array, Transceiver, CPU/GPU) and software for acquiring the data used to create real-time images further de-risks HEXWAVE’s program.

Aman Bhardwaj, COO and President of U.S. Operations, commented: “This represents a significant step forward in HEXWAVE’s development. The ability to now generate active real-time 3D imaging using the HEXWAVE prototype will enable the team to continue its rapid development of HEXWAVE with the goal of completing the alpha testing by the end of the 2019. After this milestone the focus of development will shift from transferring and developing the technology to training, testing and improving the design for production and commercialization. We are very excited to have been able to achieve this milestone given the significant changes that have occurred to the underlying subsystems since the technology behind HEXWAVE was first developed in MIT Lincoln Lab.”

Liberty continues to make strides to meet the initially disclosed aggressive timeline, and is well on its way to the completion of alpha testing by year end, as noted in its June 24, 2019 release.

Liberty has announced 11 high calibre beta test partners to-date, including Port Tampa Bay, the University of Wisconsin, Pearson International Airport, the Metro Toronto Convention Centre, and the Maryland Stadium Authority, and is looking forward to commencing the building of its initial beta units upon completion of the system integration phase of the alpha testing.

HEXWAVE is occupying a new and unique segment in the security market, set apart by nine distinct discriminators that identify it from other security systems on the market. These discriminators include:

On Behalf of Liberty Defense

Liberty provides security solutions for concealed weapon detection in high volume foot traffic areas and has secured an exclusive license from Massachusetts Institute of Technology (MIT), as well as a technology transfer agreement, for patents related to active 3D radar imaging technology that are packaged into the HEXWAVE product. The system is designed to provide discrete, modular and scalable protection to provide layered, stand-off detection capability. This is intended to provide a means to proactively counter evolving urban threats. The sensors with active 3D radar imaging and Artificial Intelligence (AI)-enhanced automatic detection are designed to detect metallic and non-metallic firearms, knives, explosives and other threats. Liberty is committed to protecting communities and preserving peace of mind through superior security detection solutions. Learn more: libertydefense.com

By their nature, forward-looking statements involve known and unknown risks, uncertainties and other factors which may cause our actual results, performance or achievements, or other future events, to be materially different from any future results, performance or achievements expressed or implied by such forward-looking statements. Such factors include, among others, the following risks: the interfacing with existing secuirty systems and future testing. These fluctuations may adversely affect the price of the Liberty’s securities, regardless of its operating performance. There are a number of important factors that could cause Liberty’s actual results to differ materially from those indicated or implied by forward-looking statements and information. Such factors include, among others: currency fluctuations; disruptions or changes in the credit or security markets; results of operation activities and development of projects; project cost overruns or unanticipated costs and expenses; and general developmenty, market and industry conditions. The parties undertake no obligation to comment on analyses, expectations or statements made by third parties in respect of their securities or their respective financial or operating results (as applicable).

Liberty cautions that the foregoing list of material factors is not exhaustive. When relying on Liberty’s forward-looking statements and information to make decisions, investors and others should carefully consider the foregoing factors and other uncertainties and potential events. Liberty has assumed that the material factors referred to in the previous paragraph will not cause such forward-looking statements and information to differ materially from actual results or events. However, the list of these factors is not exhaustive and is subject to change and there can be no assurance that such assumptions will reflect the actual outcome of such items or factors. The forward-looking information contained in this press release represents the expectations of Liberty as of the date of this press release and, accordingly, are subject to change after such date. Liberty does not undertake to update this information at any particular time except as required in accordance with applicable laws.